I start this post feeling a little uneasy about posting pictures and writing about such a personal topic as health and fitness. However, I feel that I’m potentially in the best shape of my life and I would like to tell other how I’ve achieved this success. It resides in two simple words.

For those of you who have been channel surfing in the middle of the night, would have undoubtably ran across the infomercial for the workout system called P90X. It’s a system of workout DVDs that is hosted by a fitness instructor by the name of Tony Horton. As I watched the TV spot, I thought to myself…”why are you watching this?”. I would like to think that I’m the last person that I would expect to buy into such a pitch, but I was very intrigued by the promises made. Ultimately, it looked like a manageable workout system. No fancy/expensive equipment needed, no driving to the gym, and it doesn’t take six hours a night. Huh…maybe this thing could use a closer look. Then I then found a coworker that had extremely positive results with the P90X system. He and his wife had such positive results, he swore by the program. After talking with him, I decided it’s time to get of my proverbial ass!

In June 2009 (pictures below), I documented the start of the program with the prescribed “before” pictures. Yikes! At the start I weighed 181 pounds. I also did the compulsory measurements at the waist, hips, chest, arms, and legs (39″, 40″, 38.5″, 13.5″, and 19″ respectively). As a part of the program, Shelley and I decided to also modify our diet in order to maximize the workouts. We focused on increasing protein and reducing saturated fat and carbohydrates.

The start of the program was a “BITCH”. It is hard to go from sedentary to a program that expects 1 hour of exercise for six days a week. After the first couple weeks, the workouts got easier and Shelley and I was able to keep each other motivated. We followed the workout schedule and continued to be vigilant about what we were putting into our bodies. We also had considerable conflicts during the summer with many travel plans. This effected our ability to keep up the prescribed P90X schedule. We made our best efforts, but it ultimately took an extra 30 days to complete the 1st round.

In October (pictures below), I documented the end of the program with the prescribed “after” pictures. At the end I weighed 165 pounds. I also did the compulsory measurements at the waist, hips, chest, arms, and legs (34″, 37″, 40.25″, 13.5″, and 20.5″ respectively). The main area of change was undoubtedly the waist. So much so, I had to buy all new shorts and pants. I went from wearing 36″ pants to 32″s. As you can see, my face also dropped considerable bulk…especially under the chin. No more “FAT FACE”!

These last 5 months have went a long way in setting up a routine that I plan on maintaining. Shelley and I have started over with the P90X system. We should complete another full round of P90X by middle of January. We have both stepped up our ability to complete each routine and have increased our strength and stamina. It sounds obvious, but it’s true. Eat right and get active! This is all you need to get similar results.

In an effort to continue documenting the life and times of the Wykles, I decided to take a stab at producing my own “blog book”. I wanted to take some of the more important post from the Wykleville site and document them in a book form. I also wanted this to be a surprise for the Shelley as a Christmas gift. After seeing some very neat samples online, I went and researched the different companies that provide book production. I settled on using Blurb after reading many positive reviews and a one week turn around. Blurb has their own free software that is required in order to upload the book. It also has simple production tools  and upload the book. I found the software a bit limiting and not allowing me to achieve the effects that I was after. So I expanded my search and found FotoFusion. It is a nice piece of software that met my needs. After a free trial, I found that it was quite powerful and easy to use. It allows you to easily crop, rotate, and re-size the photos. It also has many different photo frames allowing you to create different looks for each of the pictures that you drop in. Finally, the front and back cover was created with a Microsoft Autocollege product that takes a folder and creates a nice college of pictures.

I created each page in FotoFusion and then drop them into the Blurb software in order to upload the finished product.

You can check out the finished product here.

Who is that handsome young man in the photos? Yes, he is a boy even though he is wearing a yellow jumper. I’m another year older and it’s hard to fathom that I use the age description of “mid” thirties to describe myself. I just realized that I will only be able to use this designation for another year. Then I will be relegated to using the “late” moniker. Don’t get me wrong, I’m not complaining…I’ve got my health, great kids, and lovely wife all to help me age gracefully (gray hair and all). 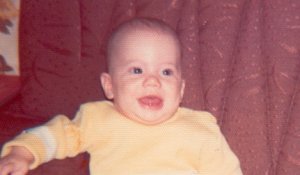