It has taken me 24+ hours to recover and get up enough gumption to write about the Wykle’s most recent road trip to visit Nagi and JPop in Orlando.

June 11 – We started the day off like a well oiled machine. Everyone was up and ready for our early start and left the house by 5 AM. This would clearly allow us to make it to Orlando by 7 PM. Everyone piled in the car and off we went down interstate 75 heading south. Shelley, Natalie, and Eli where all snuggled up in their blankets sleeping away while I was focused on navigating the sparse traffic until the sun broke the horizon. About 1-1/2 into the predicted 14 hour trip, a loud “POP!” broke the drone of the grooved pavement. Quickly the sinking “thmp thmp thmp” sound echoed through the cabin. FLAT TIRE! I jumped out and swapped the donut for the flat with a 3″ gash in the middle of the tread. This isn’t starting off to a good start.

Given that it was only 6:30AM it was obvious that it was going to be hard to find a tire repair shop. We decided to keep heading south on the donut and look for a Walmart later in the morning. We sped along keeping our eyes pealed once the clock hit 8. We found a Walmart Super Center in Knoxville that would be our savior. 45 minutes later we had a new Goodyear and upbeat spirits.

The GPS was reading only 65 miles left to salvation. Then it happened at 70 miles an hour. The van lurched and then the engine revved. I quickly noticed white smoke coming from under the hood. I quickly pulled the van onto the shoulder and rolled to a stop. Upon lifting the hood, white smoke bellowed from the engine compartment. Their were signs of liquid all over the right hand side of the engine. Something had given way and spewed liquid and then quickly turned to steam under the heat. We made a few calls and decided to try and make it to the next exit only a 1 mile away. The van started right up and made it to the exit. After talking with a few of the locals, we landed in a Wendy’s parking lot with a toe truck on the way. Nagi met us and we loaded what we could into her van and then had the car hauled to Blount Honda in Leesburg. The whole ordeal ended when we pulled into 380 Hamocks Dune Place at 10:45PM. 17:45 minutes after the start of our trip.

June 12 – We just received a call from the service manager at Blount Honda. “Full transmission failure” is the diagnostic code that has been determined from the “all knowing” computer. The only option at this point is to put a new rebuilt transmission into the 2004 Honda Odyssey with only 80K miles.

You can guess how this news was received. Holy S#$T and we will not have a van until next Wednesday. We are going to be stranded and out nearly $5,000!

The real shame in this whole fiasco is my utter disappointment in Honda’s failure with this van. This was the 4th Honda that Shelley and I have owned over the years. Up until now all of the vehicles have been worry free and only require PM and the scheduled maintenance. I have 165K on my 2001 Accord and we also got 190K out of another 1990 Accord. We pay more for Honda’s because we expect more. I will now have to seriously think about our next purchase given our new found experience with Honda.

This last picture says it all. 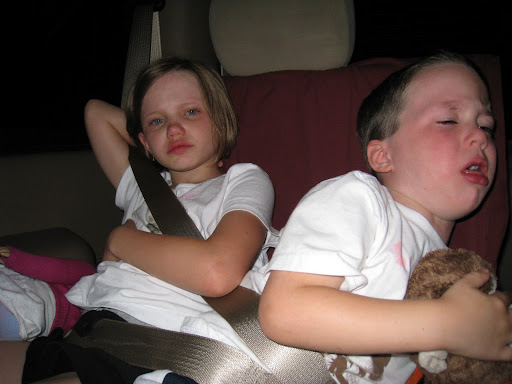 Kid melt down after 17 hours and a broken van.