In an effort to continue documenting the life and times of the Wykles, I decided to take a stab at producing my own “blog book”. I wanted to take some of the more important post from the Wykleville site and document them in a book form. I also wanted this to be a surprise for the Shelley as a Christmas gift. After seeing some very neat samples online, I went and researched the different companies that provide book production. I settled on using Blurb after reading many positive reviews and a one week turn around. Blurb has their own free software that is required in order to upload the book. It also has simple production tools  and upload the book. I found the software a bit limiting and not allowing me to achieve the effects that I was after. So I expanded my search and found FotoFusion. It is a nice piece of software that met my needs. After a free trial, I found that it was quite powerful and easy to use. It allows you to easily crop, rotate, and re-size the photos. It also has many different photo frames allowing you to create different looks for each of the pictures that you drop in. Finally, the front and back cover was created with a Microsoft Autocollege product that takes a folder and creates a nice college of pictures.

I created each page in FotoFusion and then drop them into the Blurb software in order to upload the finished product.

You can check out the finished product here.

It was Eli’s turn to top the Christmas tree this year. He still lacks a few inches in order to place the star, but with a little assistance…Ta Da!!! 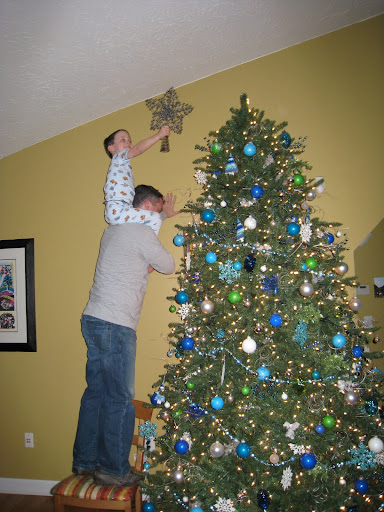 Eli still needs a little help to reach the top. 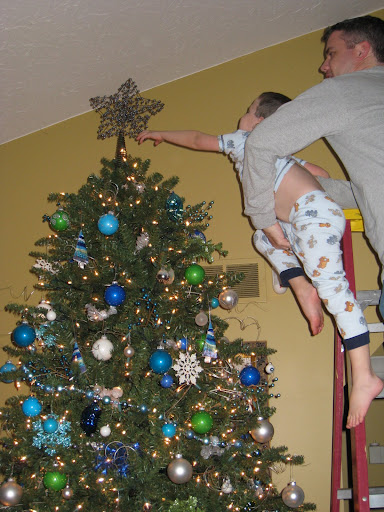 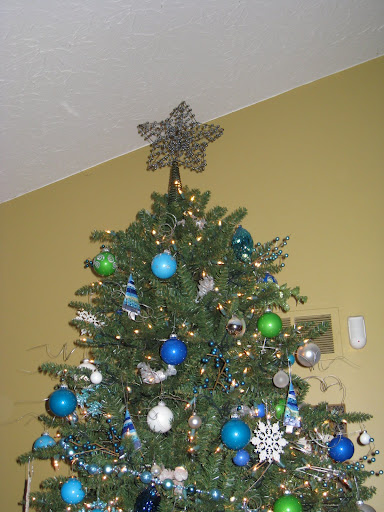 This year was much like any other. The kids both decided well in advance (with Shelley’s guidance) what they were going to be for Halloween. Of course Eli is still in the “Star Wars” state of mind. For the second year in a row, he went adorned as one of his favorite characters from the Phantom Menace…Anakin Skywalker. Natalie, on the other hand, chose to deviate from the initial design intent of the “evil princess” theme. She was not at all interested in wearing the make-up necessary to pull off the “evil” look. The negociations ensued and she decide to go with a “beautiful princess” instead.

The day started off at Little Red School House with Eli’s annual Halloween party. Since Friday is an off day for me, I was able to attend the craziness that is many 4/5 year olds running amok dressed as their favorite fictional character. Now add chocolate, sugar, and a Capri Sun = a realization that the ladies at LRSH should be given Saint status. I would never (I repeat NEVER) be able to perform as an educator for small children. As you can see by the attached pictures, everyone did have fun. More photos can be found here.

Natalie also had a party to celebrate the Halloween season that was held in Mrs. Owen’s 2nd grade class room at Goodridge Elementary. She did not have a typical dress-up event. They instead went for the more craft oriented activities combined with snacks and sweets. Her afternoon was capped off by a surprise drop in visit from Nagi and Mom. 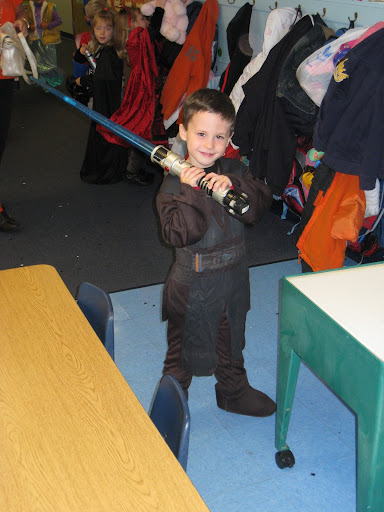 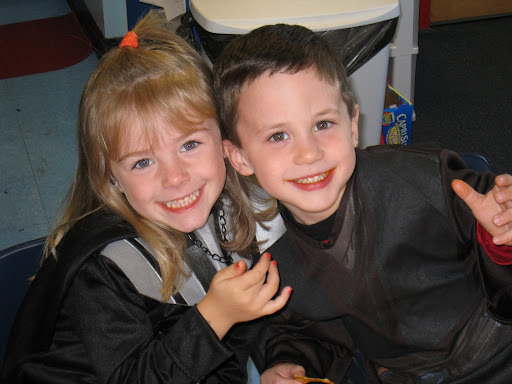 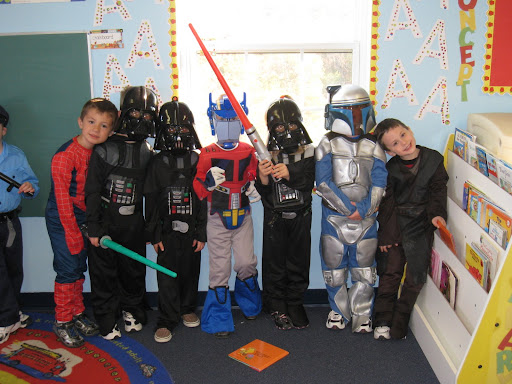 The vilians and super heros 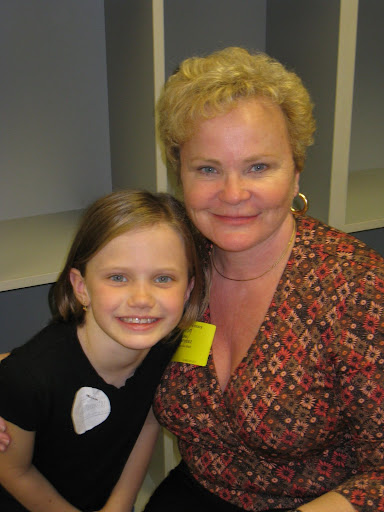 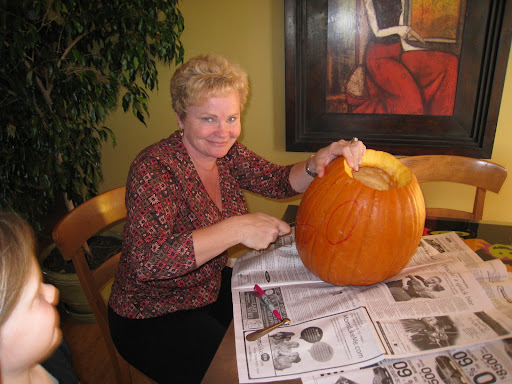 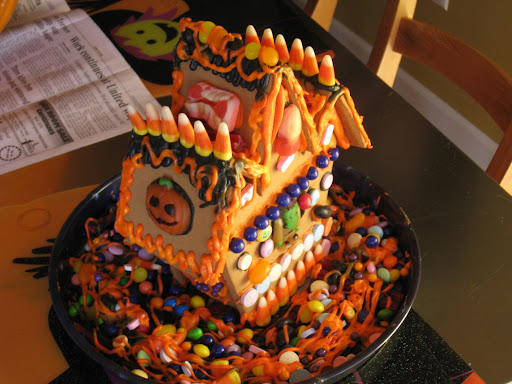 We finally got around to getting some family portraits taken this past Sunday. We tried a new company called Portrait Innovations in Crestview Hills. Everyone enjoyed the experience. You can find some of the raw photos here. More polished prints will be posted later.

The kids were watching the US gymnastics competitions today and it spurred them into action in the front yard. Eli was up to bat first. Not to bad for 4.

Just made our first trip of the season to Kings Island. It was a momentous day for both Natalie and Eli. Natalie has finally broken the 48″ barrier and is able to ride most attractions (except for inverted things) at the park. Eli also achieved the 40″ mark meaning he could also move up out of the “so called” kiddie rides.

We started the day with the Fairly Odd Coaster (a.k.a The Beastie). This would be Eli’s first venture onto a “big kid” ride. He was apprehensive at first, but hung in there and loved the experience. You can see the video of the ride here. He smiled after the first big drop and wanted to go again!

Natalie also cut her teeth today by riding one of the scariest rides in the whole park. As we walked around looking at all of the ride height requirements, she noticed that she was tall enough for the Drop Tower (a.k.a The Drop Zone). When Shelley asked if she wanted to ride it, she had no hesitations…YES! Luckily, I had to stay back and chaperon Eli while we waited. You can see the whole video here.

Natalie continued to break new ground throughout the park. She rode Drop Tower, The Beast, Flight Deck, and Viking Fury. Eli also rode most everything that he was big enough to ride – Viking Fury was the biggest feat next to the Fairly Odd coaster.

Needless to say…Shelley and I both are quite impressed with both of the kids. They were both riding things that we would have never attempted at their ages (or even older). They both seem to have a fearless streak in them.

Another nice day in NKY. 70F and overcast skies. Kids had some fun playing outside before and after dinner. Mom is in Amsterdam until tomorrow and was not able to give us a call today. Kids missed hearing her voice today, but I assured them they would be talking to her before bed tomorrow night.

I found this video when doing a house keeping. This was taken by Sherry (sitter) while on watching the kids. As you can tell Natalie does enjoy singing…Eli also makes a nice backup dancer. The hats are also a nice touch.

Just added a few photos from Easter. Check them out here.

Eli got is first big boy hair cut yesterday with a little extra style. Mom got a little weepy-eyed when saw the fashionable spike in the front. All she could say…”he looks so grown up, I want my baby back”.